Does this ever happen to you?  You see a home featured in a magazine and it immediately appeals to you.  You just know you’d enjoy living in a space designed just like it.  Okay, maybe you wouldn’t want to live in the geographical area the home is located in, but you feel a kindred spirit with the designer because the home holds such appeal for you. 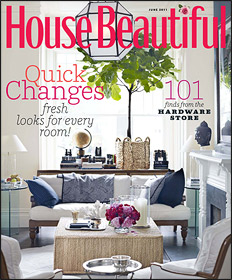 That happens to me all the time and while the ‘favorite homes’ file is thick, the feeling is the same.  The furnishings, accessories and details in the design are just the way you like them.  This happened to me (again) with Ellen O’ Neill, one of interior design’s Leading Style Makers, leading lady at New York’s St. Regis Hotel, and the woman behind Ralph Lauren.  House Beautiful featured her Bridgehampton, NY country house and later did a piece on her studio apartment located in Gramercy Park, NY last year and it was love at first site.

Ellen O’Neill’s country house was featured a couple of years ago by House Beautiful.  The charming home is located in Bridghampton, New York features a country red and white decor and exudes such an inviting atmosphere.  One can rent the home HERE.  ln her interview with Christine Pittel Ms. O’Neill explained that the red and white theme resulted in an old metal factory table with peeling red paint she found at a Paris flea market.  She built the color theme around that.  The designer believes that things that are weather-worn give a room character.  It’s that philosophy that resonates with anyone that delights in flea market finds and antiques.

Her interview by Carol Prisant was entertaining and made her sound so well grounded.  I know, I’m beginning to sound like one of the celebrity fans that feel like they are “friends” with their favorite celebrity.  Guilty as charged, sometimes.

A doggie makes such a nice decorator item!

The faded stripes on the sofa only add to the charm of this space.  This is a getaway house so it shouldn’t be too perfect.

The toile and striped fabrics are inspired.  Ms. O’Neill said she likes it to feel comfortable, not too precious for use!

Above images are “country mouse” abode, below are “city mouse”…

Ellen O’Neill told HB (Carol Prisant) that when she bought she was ready for a single room studio.  She had purchased a home in the country and felt she only needed a small space in town.  When she saw the ad that read, “One room with balcony overlooking Gramercy Park, fireplace, outstanding views, key to park,” she was sold.  For those of you who didn’t know this (moi), Gramercy Park has its own private park, very much like the private parks in London.  {Remember the scene in Notting Hill when Julia Roberts jumps the fence of a private park, with the reluctant Hugh Grant?}  The area, built in 1830, is described as possibly the most gorgeous square in New York.  One of my favorite parts of the interview with Prisant was when Ms. O’Neill explained that in preparation for the move to the studio apartment she weeded and pared down her inventory of belongings…she said that she lasted about 4 days in her new studio with her minimalist approach.  She explained, “I felt so naket, it was almost like I didn’t have clothes on.  I really needed my paper and things.”  I totally relate, must have my stuff!

All photos for O’Neill’s studio apartment by Thomas Loof for House beautiful.

Ms. O’Neill says that her studio has actually slept 5 using some blow up beds.    “There’s so much space that I can have a cat and dog living with me, and relatives staying over”.

This quote was one of the reasons I felt sure I’d like this designer, “I like a sense of humanity in a home. I’ve tried not to like stuff, but face it… I just like stuff.” 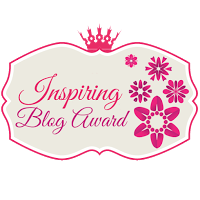